Summer Assignment Connections:
Please read the notes below AND THEN VIEW THE LECTURE BELOW:
Today in class I will be connecting many of the concepts that you initially learned this summer with a discussion that will contain the following:
The purpose here was to interconnect the important concepts of  Mendelian Genetics, Chromosomal line of inheritance, and Evolution.
I discussed 2n = 2 Diploid individual to cell cycle where DNA is duplicated in cell growth cycle.
Notice in the diagram below there are 4 chromosomes at the End of G2 (growth phase 2) due to the duplication of the DNA in the S (synthesis phase).
Notice the Cell drawn has 2n = 2 BUT 4 chromosomes are drawn!  This is due to the duplication of DNA in the S phase of the growth cycle in preparation for Mitosis.
This diagram below represents a pie chart in the life cycle of the smallest unit of life (a cell).  A cell spends the greatest amount of time in interphase (any part of the life cycle where the cell is not in Mitosis) and the smallest amount of time in Mitosis.
*Notice that in G2 the cell double checks the NEW DNA copy that is made for mismatched code (MUTATIONS!)
Normally the cell repairs the mismatched code and but in very rare occasions the cell does not correct the incorrect code and a mutation occurs.

A mutation COULD result in a different Amino Acid (makes proteins) and a different shaped protein that does not catalyze the chemical reaction to make the targeted allele (red pigment in the red flower).  This “broken gene” becomes the recessive allele and no red pigment would make the flower white.
Keep in mind mutations are how we gain new alleles.  The red pigment for the red color resulted as a mutation from another allele. If the new allele from a mutation is beneficial or neutral (no negative or positive effect), the organism keeps that allele because it is able to survive and reproduce maintaining the new trait in the next generation.  This is how evolution works!  If the mutation is lethal to the organism the trait does not get passed to the next generation because organism will die before it can reproduce.
1. Mitosis, we see the chromosomes silly!!!! In interphase there are no chromosomes (wound up and bundled DNA).
2. Diploid = 2 , 2n = 2, 4 chromosomes are shown because of the duplicating of DNA in interphase (S).
3.  Law of Segregation.  Equal chance of getting the maternal or paternal chromosome which would make the haploid number = 1. in each gamete.
Chromosomes are the form of DNA that is wound up around histones (proteins that provide structural support) that become nucleosomes and chromatin fiber.  In this wound up state DNA cannot be used by the cell.  This is the state of DNA (the code for the proteins) that is necessary for segregation in Mitosis and Meiosis and prophase begins when DNA condenses into chromosomes.  We can use a light microscope to view cells in Mitosis by identifying the appearance of chromosomes.  When a cell is in interphase (NOT MITOSIS) the DNA is not coiled up in chromosomes so that the DNA can be used to code and makes proteins for normal cell life functions.
Imagine if the cell did not wind its DNA into chromosomes.  How would it separate or segregate into a daughter cell?  Imagine a plate of spaghetti that you want to separate.  How would you do this with the accuracy needed for life to exist in the next generation.  How do you make sure each daughter cell gets an exact copy?
Human Karyotype – A picture of the homologous pairs of chromosomes (23 in humans)
Most often, this is done using the chromosomes in the white blood cells. A picture of the chromosomes is taken through the microscope. This can be accomplished because DNA winds into chromosomes in prophase!!!
Then, the picture of the chromosomes is cut up and rearranged by the chromosome’s size.
1. Could these pictures of these chromosome been taken in interphase?  Answer below.
2. Also did the person who made this karyotype eliminate some chromosomes for simplicity? Answer below. 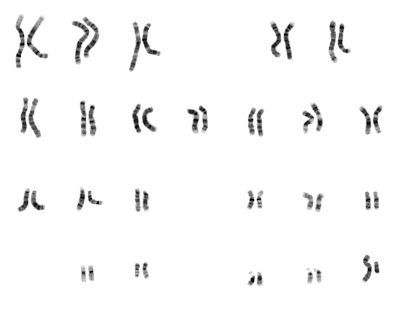 Notice the 23 pairs!
1. No because the DNA is not wound up in chromosome in interphase so that the DNA can be used to make proteins as part of the normal function of the cell life cycle.
2. YES they had to!  Chromosomes start appearing in prophase so they would appear with their duplicated sister chromatids.
Please view today’s lecture:
Complete the Classwork form below based on the above notes and class lecture.