Main focus –
a) To learn the reproductive organs of the FAST Plants.
b) To pollinate our Fast Plants and our Test-cross Group .

1. Evolution basics —-> Angiosperms and pollinators = Coevolution
2. pollinate Fast Plants/marble notes on reproductive parts of a flower/seeds
*We kept the Test Cross Plants separate so that we did not contaminate our dihybrid cross.  Everyone pollinated all test groups EXCEPT the true breeders that we will use for the test cross.
2 people pollinated the test cross plants with the bee sticks AFTER they were done with the Dihybrid Cross pollination. These 2 people threw out their bee sticks after the test cross pollination.
3. Count Leaves, size of leaves, buds per flower to gather other health data to test your hypothesis.
Most did a random sample from each group. Please use the file below to add your data:
Google Sheet:https://docs.google.com/spreadsheets/d/1pECFwM_TYJX346idjitvDZgdIt3Ic8TQM0f2F7T1i2s/edit?usp=sharing

Notes for the Lab will come from the following presentation:

1: Extra Credit Form –  Best out of the Ant article, Stickleback, and this form

Main focus –
a) Statistics Quiz – complete
b) To review the basics of Evolution through the concepts of statistics and
Chromosomal line of Inheritance.
1. Complete the Statistics Quiz
2. Review the Sticklebacks Form
3. Non-mendelian /Evolution Notes:

a) Use X -linked recessive disorder of color blindness to demonstrate that Mendelian genetics is not upheld.

– A greater percentage of males will have colorblindness than female. How can this be if the probability of being a male or female is 50% and probability of getting a mutated X chromosome is 50% from a heterozygote?   Shouldn’t the allele for color blindness  independently assort so that 50% of the females and 50% of the males can have color blindness?  Why is it that more males are colorblind? Why does sex makes difference in this disorder?
The gene for color blindness is on the human chromosome that also has the genes for female characteristics!!!

Because the gene is linked (the allele for colorblindness is on the same chromosome as the female characteristics trait) males cannot be carriers and cannot be heterozygotes!!!  It just takes one X mutated chromosome to have the disorder.

Because of this the ratios we would expect from our cross above would be STATISTICALLY Significant  from actual results. We would expect equal number of males and female to have the disorder but that is NOT the case.  This is Non-Mendelian.
The above probability problem uses the multiplication rule because the each event (separating of a different chromosome independently) is separate if you assume that the 2 traits are on different chromosomes.  This is Mendelian!!!
We would get 1/8 probability if the genes for these traits were unlinked.
Because the the actual probability is 1/4  (NOT 1/8) , the 2 traits do not travel independently as Mendel always suggested.  We would use the addition rule here and count how many of the offspring would have the phenotype.  OUT OF THE 4 CHOICES IN THE PUNNET SQUARE THERE IS ONLY ONE!
1/4 + 0 = 1/4 of all offspring are colorblind but 50% of the males are also!
Evolution Basics: 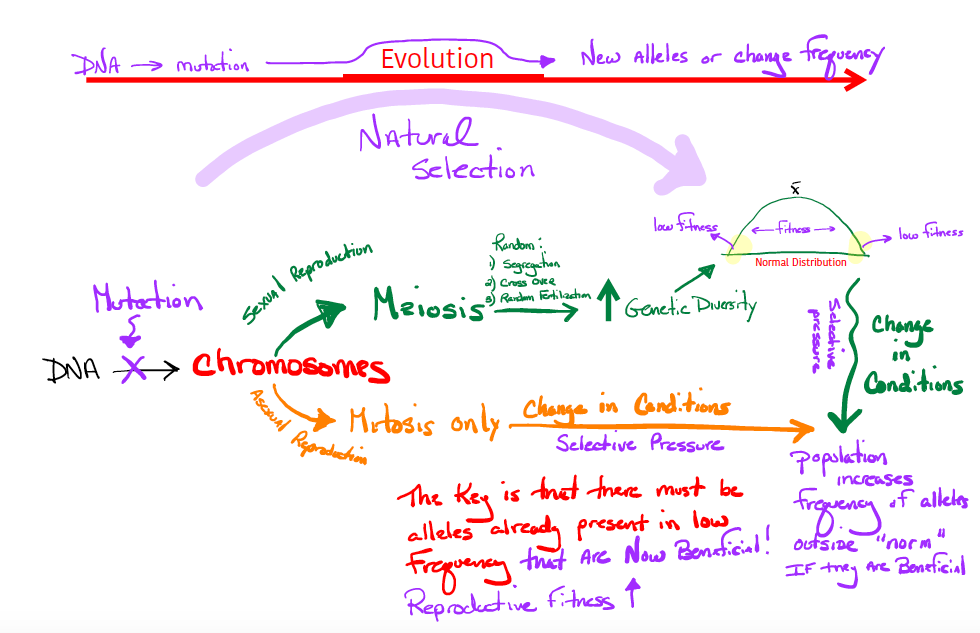 Individuals do not evolve!!  Populations due by shifting the “normal distribution” toward individuals that have the greatest reproductive fitness = THEY LIVE LONG ENOUGH TO REPRODUCE MORE and pass on their alleles to the next generation.  This increased reproductive fitness is due to the SELECTIVE PRESSURE that the CHANGE provides!

IF there is not already an allele present THAT WILL HELP in the NEW ENVIRONMENTAL Conditions (Change) THERE WILL BE No EVOLUTION. This means that if an allele is not already present in low frequency BEFORE the change THERE WILL BE NO SELECTIVE PRESSURE for any allele and the population will suffer and eventually become extinct.
NOTICE that SEXUAL REPRODUCTION increases Genetic Diversity so much more than ASEXUAL REPRODUCTION does and thus produces more various alleles.  This variety of alleles creates the ABILITY for species to have a better chance to Evolve or survive NEW Changes in the environment.  How many current advanced species are alive today that undergo asexual reproduction?  Not many why?  Could we as humans evolved into the extremely complicated life form we are now if we did not sexual reproduce?
Asexual Reproducers ONLY get get variety when a mutation occurs while sexual reproduction Amplifies the diversity (from a mutation) by segregating chromosomes randomly, crossover, and random fertilization.
ALL Evolution however starts with a mutation or a Random change of code in our DNA that creates new proteins that can stop current chemical reactions (recessive) OR START NEW REACTIONS (that make new alleles!!!)

1:  Please watch the video in the Peppered Moths.
2:  Please complete the Critical Thinking Form below:

1: Evolution of the Peppered Moths Video:

4.  Make a Bar graph using Excel of the second heath metric for Lab 2.

1: Read and try to interpret research article on peppered moths. (Due Monday Morning 10/4)

You will have to answer questions on this article and there are no exceptions.  If you do not complete the form with effort you will lose 10 points on the test but if you answer the form with effort and get some things incorrect you will lose no points.
I have posted a lecture below to help you interpret the statistics.  Expect me to ask you make conclusion statement from the data, table 2 and figure 1.  This is the only part of the test you may have open discussions on but your answers must be your own words.
Research Article – Peppered Moths.pdf
View Download
2. Study for the Test 1 – next Tuesday it will begin.  Link to the study guide.