DUE by (or on) by August 23th  –
***By the way we are entering the 1st week of the 3rd quarter of Regents Chemistry
4 Hours
* Connections: We have been looking at how atoms differ in mass and how they differ in compounds and how they rearrange in chemical reactions but we have not looked at the structure of an atom yet.  We have been looking at the macro (large view) of atoms and their consequences in Chemistry. The idea of the mole concept that was born from the Gas Laws (Gay-Lussacs work, Avogadros work) allowed us to write chemical formulas and complete balanced chemical reactions that allowed us to predict how much of another chemical is needed to react or produce another chemical (Stiochiometry).
We now need to take a step back and look internally (Micro) at atoms so that we can understand WHY the chemical reactions occur as they do in the types of reactions we studied. Atoms of different elements have different chemical properties that allow certain types of reactions and some do not react at all.  The answers to WHY  is the MICRO understanding of ATOMIC Structure.
Historically, we left off in the mid 1800’s where Chemistry and stiochiometry took off when we could explain what was in GAY-Lussacs volume gas boxes using Avagadros Hypothesis.  The chemical formula problems, chemical reactions, balancing and stiochiometry all came from that moment.  It was only in the late 1800’s and early 1900’s did we start to have experimental proof that there are pieces (protons, neutrons, and electrons) to atoms and how these pieces differed in their number and arrangement that lead to their different chemical behavior.  We know from AP BIOLOGY that Oxygen attracts and pulls electrons through the electron transport train.  Why does oxygen do that? Why does it cause many metals to rust?  Why doesn’t Gold Rust?
The answers to all these questions lie in the structure of each different atom that makes up different elements. *Remember that each element has its own unique atom (module 2).
Lets GET ATOMIC!!!!!!
Activity 1:  SKILL :  Early Models of the Atom – I
1: Please view slides 1 – 70  in the presentation below and view Atomic lecture 1 below:
2: Complete the Form below:
I have included the worksheet for notes but you are not responsible for completing it.
Atom Structure 1 History of atomic models.pdf
View Download

Please go to slide 65 – and up for Earnest Ruthorfords Gold Foil Experiment not the number I say in the video!
Atomic Structure Form 1:

*Activity 3:  SKILL :
*1: Determining the subatomic particle (protons, neutrons, and electrons) of atoms
*If you remember how to get the number of subatomic particles from the periodic table please try the worksheets below and check the key to make sure you have this easy skill mastered.
If get it please continue with the second skill.  No need to complete these worksheets. But please make sure you have the skill.
Atomic Structure 2 – subatomic particles.pdf
View Download
Atomic Structure 2 – subatomic particles Key.pdf
View Download
Atomic Structure – Ions 2013..pdf
View Download
Atomic Structure – Ions 2013 key.pdf
View Download
*If you have forgotten how to obtain the number of subatomic particles from the reference table please watch the lectures below:
Activity 4:  SKILL : Isotopes and the weighted mass problem.
1: Please view the Lecture 2.10 above from 2:28 on that introduces ISOTOPES.
2: Follow along with me using the worksheet below and the lecture below.  Review with key.
Atomic Structure 3 – Isotopes 2012.pdf
View Download
Atomic Structure 3 – Isotopes 2012.pdf key
Download
Connections:  The mole concept gave us a way to use a mass scale (balance) to measure grams and convert to  moles that we need to DO chemistry.  We were able to do this because we came up with relative atomic mass, which is how 1 gas differed than another in a ratio. For instance Oxygen was 16 times more massive than Hydrogen thus O has a relative mass of 16 and H has a relative mass of 1.  We use these numbers to tell us how many grams equals 1 mole in atoms (gram atomic mass) and compounds (formula mass/molecular mass).  These masses we use in the periodic table are just the masses of the most common isotopes (forms) of that element.  The periodic table reflects the mass number of each atom as the most common form of mass of that atom. Originally Dalton, (Modern Atomic Theory Dude) suggested that atoms differed by mass. We now know this is incorrect as ATOMs differ by proton number!  In fact the same atom can have many different masses.  We did not know this until we developed a tool called the mass spectrometer.
Atomic Structure Assessment 1
1: Please complete the RAT Below and place answers into the auto-reply form below:
Readiness Assessment Test 24 – isotopes.pdf
View Download

Activity 4:  SKILL : Bohr model of atom –
Connections: We now should have a firm grasp of the structure of the atom at least internally (protons and neutrons).  We will study the energy changes that keep protons in a very small volume of the entire atom in nuclear chemistry at the end of the course next year.  Those forces in the nucleus are the strongest in universe which lead to fission and fusion nuclear reactions.  Right now and the rest of the your time with me we will discuss the energy changes in atoms and subsequently  in chemical reaction by the changes in energies of electrons.  We have discussed the discovery of electrons by William Thompson (It’s a corpuscle !) and how they are lost or gained to become ions but now we need to learn that their arrangement in the atom and the change of this arrangement is what creates the energy changes in a chemical reaction.  We have learned that chemical reactions can be exothermic (overall energy released)  or endothermic (overall energy absorbed) and we have studied that some compounds are more stable than others.
The products in the following reaction, CO2 and NO are more stable (lower in energy) than reactants, CO and NO2 thus the reaction is EXOTHERMIC as the energy is released.  The extra energy of the reactants (CO and NO2 ) is released when they form the products (CO2 and NO).  We have learned that the ΔH = negative value here because of the energy released or is lowered.   WHY?  Because of how the electrons are arranged!  Chemistry in terms of energy changes deal with electrons arranged in either a stable low energy state or higher excited state.
Remember it was the electrons in C-H bonds in sugar that cell respiration uses for energy! The first model of the atom that dealt with energy changes due to electron arrangements was Niels Bohr.  His model of the atom that used principle developed from Albert Einstein and Max Plank was the start of the quantum revolution.  It changes Everything!
1:  Please view the lecture below with the worksheets below as I teach you the basics of the Bohr model.
Bohr model Regents 1 2014.pdf
View Download
Bohr model Regents 1 2014 key.pdf
View Download
Bohr worksheet 2 2015.pdf
View Download
Bohr worksheet 2 2015 KEY.pdf
View Download
2: Please read my notes below and view all demos.
This is a gas tube filled with hydrogen that electricity is being shot through. I am using a diffracting lens to separate the individual photons (spectral lines) given off by the gas when electricity is shot through it.
Every element has a unique arrangement of electrons with a unique number of protons thus each element has a unique spectral “fingerprint” that can be used to identify elements. Hydrogen has the 4 classic spectral lines!
In this demo I had the gas discharge tube off to the left and then I placed the diffracting lens off to the right of my camera so that you can see both the raw light and the individual photons that create that light.  Those photons are tied to a single electron leap back to it original position!
The different energy of a photon emitted by an electron returning from its excited state to its ground state is measure in the color of the light which depends on the wavelength or frequency of the light based on the following formula:
1:   Energy = h x v  or E = hv
h = Planks Constant = 6.63 x 10-34 Js  (Joule seconds)
v = frequency = how many waves per time period (light is an electromagnetic wave!)
Thus, higher the frequency, higher the energy = greater energy leap!!
Also the higher the frequency the shorter the wavelength which is given by this inverse relationship (like Pressure and Volume):
2:    c = wavelength  x frequency (v)
c = speed of light
wavelength = distance of each wave
So if the speed of light is constant if the frequency increases then the wavelength must decrease.
We can see this inverse relationship below: So Red photons have longer wavelengths with SMALLER frequencies while Blue’s have shorter wavelengths and higher frequencies.
In this demo I use sound as a way to visualize the relationship between wavelengths and frequencies.  Sound is not a electromagnetic wave but is a transverse or mechanical wave so it behaves using the second equation.
Sunset Demo:
– This demonstrated how the different colors of light have unique energy levels.  The Red/yellows have the lowest energy and the blue Violet has the highest energy.  The higher energy light is getting trapped (or is scattered more) as the beaker thickens ( as the chemical reaction continues).  The light shining through the beaker is made of  lower energy light that can get through the thickening beaker because it scatters less. (Blue/Violet light has more energy to scatter because it has a shorter wavelength and higher frequency.
It is important to realize that the Bohr model was the first quantum model meaning that these electron energy levels were quantized meaning the can only absorb or emit exact amounts of energy thus each element can only give off a specific spectral lines.
Phosphorescence Demo :
This demonstrated that only a certain light colors have enough energy to make the glow in the dark substance  glow.  Only the blue light stick had high enough energy to “excite” the paper.  The green and red light stick did not have enough energy.
This also demonstrates that the paper can only accept certain energies to glow.  This is what I  will be getting into tomorrow.
Fireworks:  Where do the get the different color from? 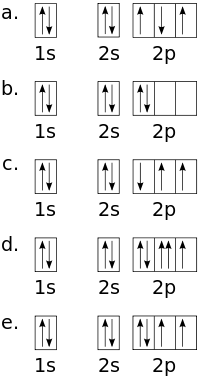 The end of Module 8.