* Connections – The electron arrangement and the transitions of electrons in atom is really what determines the chemical properties of elements and compounds.  In large part is it what chemistry is really about.  We have looked the at the stoichiometry chemical compounds and reactions but none of that would be possible if elements did not bond!  Before we begin our bonding discussion we must first start with a brief look at how the periodic table was made and how the electron arrangement or configurations paralleled the early work of the arrangements of elements in the periodic table.  You see the periodic table was made to help organize the known elements of the day in some logical fashion.  One scientist, Dimitri Mendeleev made a table and said that his table followed a repeating pattern based on increasing atomic mass (it was not known in 1850’s that the proton number was the determining factor in differentiating elements) and changing chemical properties.

This pattern he called Periodic Law and his table was different than all others of the day because he was able to predict the chemical properties of elements elements that were not discovered yet based on missing elements in his table.  Mendeleev did not know what caused the repeating pattern of properties but as you can see from your work in atomic structure, the electron configurations were determined in the same patterns (just 70 or so years later!)  Quantum mechanic’s and electron arrangement that resulted from it were proof of the Periodic Law of Mendeleev that he found in 1860!
Lets take a look at his early table: 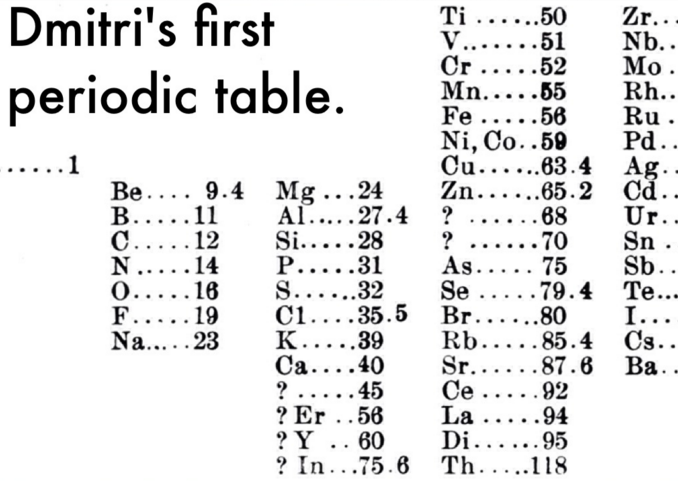 Now in Mendeleev’s table the columns that we see in the modern periodic table were rows. So if you look at row of Na it will be the 1st column in our current Periodic Table.
Look at the question mark at atomic mass 68 and 70.  Remember that Mendeleev’s table was created in order of atomic mass and that chemical properties repeated with the atomic mass changes.  In his table, if you were in the same row you had the similar chemical properties thus B (Boron), Al (Aluminum) were similar.  Zn who had a similar chemical properties of Mg (we now know that they both liked to become +2) had a atomic mass of 65 while the next heaviest element known at the time was As (Arsenic), atomic mass 75 and it had chemical properties similar to N (nitrogen) and P (phosphorus) so Mendeleev put As in that row.  So because he jumped to rows with As he predicted there were 2 elements that were not discovered yet and the amazing part is that he could predict what the properties of these elements based on the atomic mass they had.  If is had an atomic mass of about 68 then it would have properties of B and Al but if it had a atomic mass of about 70 it would have properties of C (carbon) and S (silicon).
Gallium (Ga – 69.7) and Germanium (Ga – 72.6) were soon discovered after the publishing of Mendeleev’s table and they of course had the correct atomic mass and properties that Mendeleev predicted, giving evidence to his periodic law!  I must also report that on many occasions Mendeleev changed the known atomic masses of certain elements (based on the mole concept!!!!) because they were often not very precise values.  Measuring pure gases as the same temperature and pressure was not easy work, especially if some elements were not gases at STP. Not only did he predict the chemical properties of elements not discovered yet he also corrected many atomic masses  that were accepted values but were not accurate.
You may also ask what were the similar chemical properties that Mendeleev was using as his chemical law?  They were the chemical compounds that he could write because of Cannizzaro’s work at the Chemistry Conference!!!   For example: B and Al are related because both will make the same chemical formula with oxygen:
B2O3  ,  Al2O3  and guess how Gallium binds with oxygen?    Ga2O3
That means that Boron, Aluminum, and Gallium all become +3
which means all three have the same number of valence electrons!
Why is this so?  Mendeleev just said it was Periodic Law but we now know because B, Al and Ga both have the same number of valence electrons due to having similar electron configurations (which again was not found for 70 years later with french accent!)
Also we learned about Robert Moseley who used x-rays to determine the unique proton number of each atom.  After his work the periodic table had to be adjusted so that the Periodic table went in order of atomic number NOT atomic mass.  For instance:
So you can see that all of these historical developments are interrelated!!

Concepts:
1: Table of elements arranged according to chemical properties (that we now know to be valence electrons).
2:  The three trends of the periodic table:
a) Atomic Radii–  The size of the atom
b) Electronegativity–  The attraction that an element has for (other atoms) electrons.
c) Ionization Energy – The energy needed to pull electrons away from an atom.
3:  These three trends are responsible for all of the properties of elements and thus defines elements as Metals, Non- metals and Metalloids.

Concepts on this lecture:
a) Metalliods (Semimetals) separate the metals and nonmetals.
b) Metalliods are located on the Staircase in the periodic table
c) TRansitional metals are locate in the middle of the periodic table and are less reactive than the metals          that are in group to the left.
d) Metal reactivity increases as the atomic radius increases.
e) Nonmetal reactivity increases as the atomic radius decreases.
g) Most reactive metals are in the Alkali (group or column 1) and the Alkaline Earth (group or column 2).
h) Most reactive nonmetals are in group (column) 17 called the Halogens.
i)  The least reactive group is in group (column) 18 called the Noble Gases.
1. Please watch the lecture 3.11R below and continue placing notes on the blank periodic table you used for activity 2.
2.  View the all slides of the Alkali (group 1) metal reactivity presentation.  Basically, I have videos of all metals of the family dropped into water.  Each metal will lose its single valence electron to hydrogen that is bonded to the water.  Notice what happens to the reactivity (the ability to lose electrons) of each metal as we move down the group (or as the atomic radius increases)
There are no questions for the presentation but you need to view the demos to get a feel of what I am trying to teach!

Activity 4:  SKILL:– Observe the periodic trends through Graphs of Data from Elements

1. Please download the three graphs that plot Electronegativity, Ionization Energy, and Atomic Radii with atomic number.
In your regents chemistry class you would have made 3 graphs that plotted the three trends listed above with increasing atomic number to visually see the periodicity of elements that Mendeleev first discovered.
Atomic Radius, Electronegativity, Ionization Energy graphs vs Atomic Number.pdf
View Download

2. Write the element’s symbol above each major peak and valley on of the three graphs like this:

3.  Please answer the following questions in the form below:
3 : Periodic Graphs Form:

*Important – IT ALWAYS REQUIRES ENERGY TO BREAK BONDS and ENERGY IS ALWAYS RELEASED TO FORM BONDS!

WHY?  BONDING, like in NaCl results in stable electron configurations thus to break a stable (low energy state) energy is required, while energy is released when a bond (a low energy state) is made.
So in chemical reaction bonds must be broken (endothermic) and rearranged or formed (exothermic).  How is it that the reaction of making NaCl was overall exothermic (the heat was written in the product side). The answer is that it more energy was released in forming the stable NaCl ionic crystal than it was in breaking the bond in chlorine ( Cl2  ).

Simple review of ionic lewis diagrams: (utilizing the criss-cross method)
We did this sort of did this with writing chemical formulas.

and determining Bond and Molecular Polarity
1.  Please view the lecture 4.16R and 4.14R (in that order)below and fill out the backside of the worksheet with me. You can keep reviewing with me question by question or you can stop video and go ahead and complete.
2. Complete the worksheet front and back and review with the key.
Covalent ditto 1 -Electron Dot Diagrams 1112.pdf
View Download
Covalent ditto 1 – Electron Dot Diagrams key 1112.pdf
View Download

1. Please view the short lecture below on metallic bonds ( Its not mine but it is very
good!). Mine are not that short! I am not good at doing short!
2. Complete with me the worksheet below using the lecture 2.23 and then complete with key
Bodacious bonding with properties chart.pdf
View Download
Bodacoius bonding with properties chart key.pdf
View Download 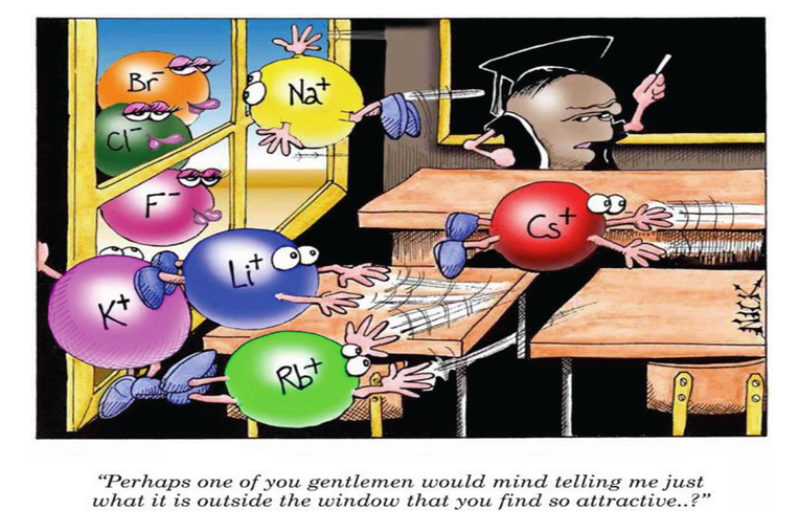