Module 6 – The Mole Concept and Stoichiometry –

***By the way we are entering the 3rd week of the 2nd quarter of Regents Chemistry
Link to the Module 6 worksheets:
https://drive.google.com/drive/folders/1OTUy08GDwAm0W-JtGYZylxTqRWM3qADv?usp=sharing
Notes for this section is the google presentation posted below the connections.
* Connections: The Gas Laws were developed based on the premise that “particles” move and collide to cause the pressure that you calculated with in the last module.  These particles troubled a lot of scientists.
What were they?
Democtritus, an early Greek philosopher thought that the smallest pieces of matter were ATOMOS (which means Indivisible).  Democritus believed that all things were made of these indivisible particles which was the Indivisible Theory. It was a philosophy and he did not have any scientific basis or proof. Later, another Greek philosopher, Aristotle believed in the Divisible Theory which stated that all matter could be divided into smaller and smaller pieces indefinitely and that that there were no ATOMOS.  Because Aristotle came later than Democritus and became the most influential Greek philosopher, the theory of ATOMOS  – Indivisible Theory – became dormant for about 2000 years.
A english teacher turned scientist was the first modern person (early 1700’s) that re-introduced the theory of ATOMOS or Atoms with his Modern Atomic Theory.  The development of the Gas Laws occurred during this time period.  The history of the development of our theories is really important to consider. What is absolutely INCREDIBLE is that the actual “discovery” of atoms so to speak occurred using colorless gases.  That is colorless gases that we cannot “see” where used to discover how atoms which we cannot see differ!
So we used gases that we could not see to see atoms that we cannot see!
Remember atoms are too small to be seen with the naked eye!  (Hey this font is small like atoms!!!)
This discovery of particles (atoms and molecules) along with the unit of how many of these atoms called MOLE is by far the most important concept in all of chemistry!  No amount of chemistry is done without these concepts!
The story begins below! – This google Presentation will be the notes for beginning part of this module.

1: Please watch all lecture 1.19 (Why we need moles 1,2,3) below on Mole concept in the order that I have posted them.  There is a bit of overlap in these lectures but i cannot say enough HOW IMPORTANT THEY are!! We will live with moles all year next year!
Lecture 1.19  – Why we need moles 1:

Lecture 1.19  – Why we need moles 3:
If you skip these lectures above you will have no idea what I an talking about below…
It would be as if I am speaking Mandarin, unless you know Mandarin.

2:  Please complete the form below based on the information learned from the three lectures above.

Please complete the form form for immediate feedback:
2 : Why do we need moles Form?

Connections* – Now it took 60 years to actually figure out how many molecules or particle a mole actually exists but really that number was really unimportant as long as we use that value as the standard!  Is one foot really the length of a some monarchs foot? Who cares as long as it is a standard that we all agree upon.

1 mole of particles = 6.02 x 1023  A mole is a word that represents a number!!!  Just like a dozen represents 12.
Does a dozen have to represent 12 eggs and does a mole have to represent molecules? NO and NO!!
A mole is a huge number because molecules or atoms it is sooo small!!!  It is such a large number its is very hard to comprehend.  For instance if a mole of pennies was equally distributed around the world to every human being, everyone would be a have a trillion dollars!!!
Remember, as long as we use a value that represents the same number of particles for any element or compound that we study we can determine its chemical formula (the number of different atoms that makes the particles), how atoms differ (atomic mass), mass of an equivalent amount of particles (formula/molecular mass), and we can figure out how much of a chemical is needed to make another in a chemical reaction (using mole ratios or number in balanced chemical equations called coefficients.   Now we can do chemistry!!!!
Gay-Lussac figured experimented with hundreds of gases reactions and figured out the volumes needed to make the reactions work.  For example he found the following with the chemical reaction that makes water from hydrogen gas and oxygen gas:

Gay-Lussac found that it takes 2 liters of hydrogen gas and 1 liter oxygen gas to make 2 liters of water vapor (gas).  This was confirmed by others.  Do not forget that they did not know that hydrogen and oxygen were diatomic (HOFBRINCl’s)

Why were there exact whole number ratios?
Hmm? Is this support for existence of atoms? Can atoms ever be less than a whole number?
Why did they combine? (meaning, how does 3 liters or reactants make 2 Liters make 2 Liters of Products??
Hmm?   Are the molecules getting bigger in the chemical reaction, while the maintaining the same number of particles in the original hydrogen gas ?  Same number of particles equals the same volume =  Avogadros Hypothesis to the rescue!  A bigger particle takes the same space as a smaller particle!
Understanding that 2 liters of hydrogen (with 1 liter of oxygen) makes 2 liters of water gas the following particle diagrams must be true!

Please view the lecture below that will reveal the answer:

1: Please view the Mole Concept Ontario TV series below (01,02,03) and answer the form below them.
*These were taken off of public TV in the 90’s so they are a bit corny but excellent!
1 : Mole Concept Video Form – 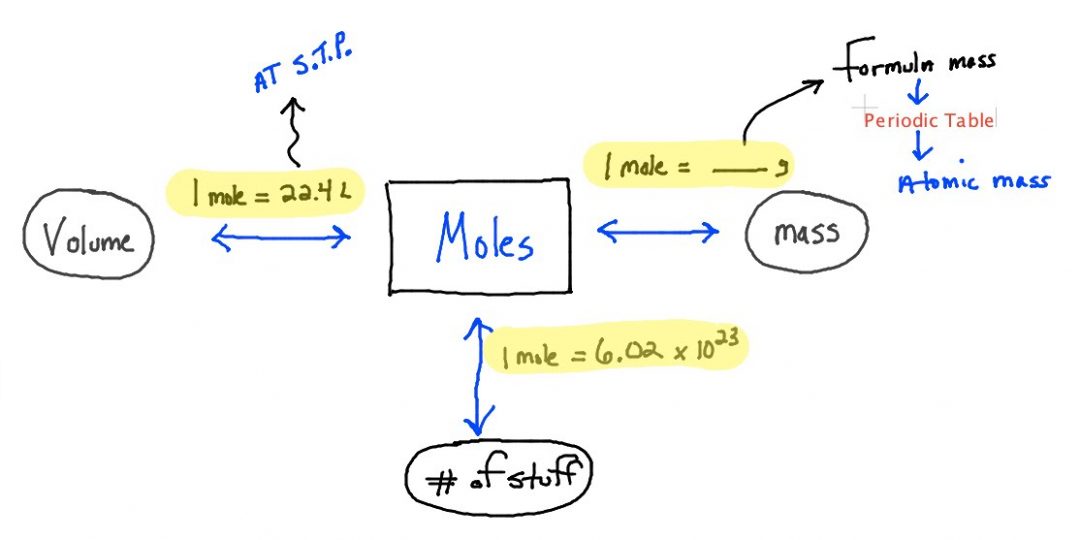 *Now that we have an understanding of moles we need to momentarily return to Gas Laws:
Egg in the bottle Demo: Notice that the number of seats or number of molecules that can exist does not stay constant because of the temperature does not stay constant.
1:  Please complete the worksheet below with me or on your own.  It is up to you how you complete this. I will explain and complete every problem in this Gas Law worksheet which are AP Chemistry problems in the lecture below.  We are going beyond the limits of Regents Chemistry here and you can see how the understanding of moles is necessary!!!
You may find it useful for me to model some problems and pause me in the video and then do some on your own.  You should know what works best for you.  I have posted the key as well.
Honors – gas law 4.pdf
View Download
Honors – gas law 4 KEY.pdf
View Download

1:  Please view the lecture on REAL GASES vs IDEAL gases:
2:  View the two lectures that demonstrate how the mole concept can be used to identify the most ideal gas which are the gases that move the fastest and thus diffuse or effuse faster.
3:  Please complete the 10 question RAT and enter into the form.
Readiness Assessment Test 22 – Mole KMT.pdf
ViewDownload

Activity 7: Skill – Stoichiometry through of compounds: Building Chemical formulas through

Determining Formula/Molecular mass
Determining percent by Mass
1:  Please complete just the first 2 questions of each side from the worksheet below. I model these questions in the video below: (you will need your periodic table to get atomic masses)
formula mass ditto and composition 0607.pdf
View Download

Module 6 assessment: All the RATS and forms given in this module were the assessments!
Module Completed !
END OF MODULE 6!